So this past weekend, I was blessed with the opportunity to plan for my close friends’ Gender Reveal Party… So. Much. Fun.

My friends dropped the envelope for the gender of their baby a week and a half before the party date. I swear to you, I thought keeping this secret was going to be tough but it was easy! Just avoid talking to people… and you should lecture anyone who tries to convince you to tell them gender of the baby. I usually respond by saying “wouldn’t it be pretty messed up for you to know the gender before the parents?”…  Guilt trips always work 😉

So yes, the expecting parents were not aware of the gender of the baby during this planning period, but rest assured, this party made it so much more meaningful to them and to their family and friends.

Now to figure out how to announce the reveal was a bit of a predicament. Of course, we weren’t going to use the cake, or balloons popping out of a box, nothing wrong with it, it’s just that my friends wanted to do something a little more explosive and different. There was the smoke canister idea, but Enola Gaye doesn’t currently sell pink smoke canisters (only blue) and even though other companies sold pink smoke canisters, the time frame for the canister to ship in would have been a little too late. Also, the canister cover was visibly pink (so it would be tough to hide the gender color) and the smoke from the canister fades in pretty slow so it wouldn’t be as “explosive”. We also scratched out a baseball reveal, since there was a chance that it would be a swing and a miss (and the ball would totally drop on the floor and break instead).  And the golf ball reveal was thought of but it would then fall back to the side that is was not as explosive either.

The two wanted to do something dealing with their favorite sport, soccer – and how is this even possible? Considering that a baseball and golf ball usually out of acrylic, we can’t simply just have a huge acrylic ball. But, it was very simple – Paper Mache! It’s like making a pinata 😉

Here is what you need to make your Soccer Ball Gender Reveal:

Please be advised that you would need about 3-5 days in advance for this to work.

2. Make the Shape.
Paste the Newspaper strips one at a time with the flour/water mix around the balloon. Cover the entire balloon but leave the opening of the balloon open so you could pop the balloon after it dries. You can layer the newspaper about 3 times max. do not paste over 3 or the soccer ball would be tough to break. You would need 36-48 hours for this to dry

Here is an Example: 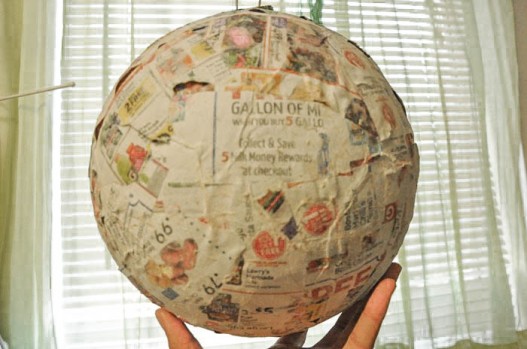 3. Behold, THE POWDER.
After the paste and newspaper dry fully after the 36-48 hour time frame, it is now time to add in the Holi Powder! Pop and remove the balloon, and place the funnel into the hole. Then add your desired powder like so. 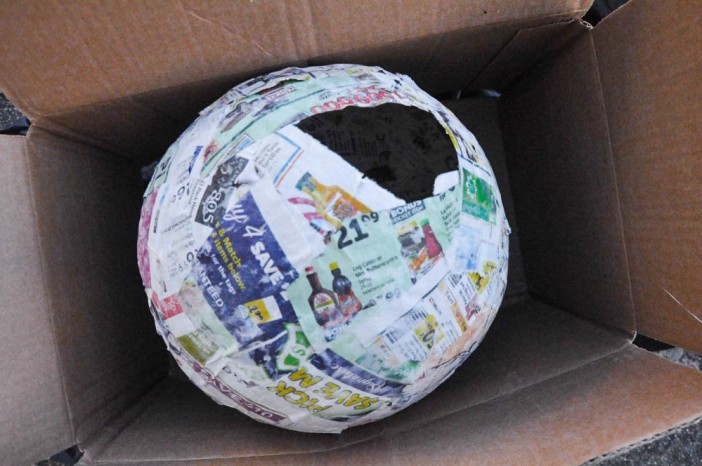 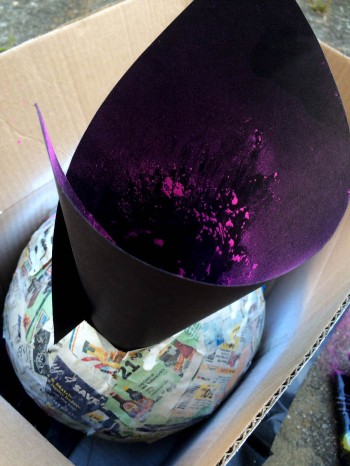 Powder in the Ball

4. Cover the hole.
I used more newspaper to cover and taped around this fresh newspaper to hold it down the newspaper. This was only done because I was short on time. (If you have plenty of time, feel free to paste the newspaper, however, please be careful to keep the balloon upright when pasting so the powder does not stick to the paste. You would need another 24 hours for this to dry.)

5. Next step is to Spray-Paint!
This may take a lot of coatings, however, it took one whole day to really set in and cover the newspaper thoroughly. The spray-paint that I’ve used said it was to dry in 10 minutes ( I’ve felt like it took 30 minutes). Whichever spray-paint you use, please read the directions.

7. Last but not least:
Let. It. Dry. This took about a good 4 hours for me to be SUPER safe. It’s probably going to dry faster, but I wouldn’t want the paint on the future dad’s shoes.

And alas, behold, the reveal!

Feel free take a look at this Soccer Ball Gender Reveal video here from the party
– Video made by DGB! Nothing, but love with these expecting parents.

CLICK BELOW TO VIEW MY RECOMMENDED ITEMS FOR THIS EVENT: